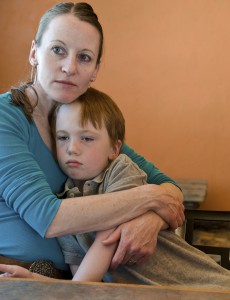 I remember very clearly the day I realized my parents were going to die.

I was about seven. We were visiting my grandparents in Alaska. My brother and I were tucked in for the night in the bedroom my dad used to share with his brother. I lay under a thin red quilt, the Alaskan summer sun still streaming through the window, despite what seemed to be a very late hour. My brother was breathing rhythmically in the other twin bed, but I was wide awake, paralyzed by the sudden realization that someday, my parents would be gone. I remember trying to rationalize it, thinking, “Well, they’re only about 40 now—they will still be alive for a very long time.” But it didn’t really help. The floor had fallen out from underneath me.

My oldest son was probably newly four, maybe even still three, when he asked if Nana was my mother. I explained that she was my stepmother, and that my mother had died.

He thought about that for a few seconds before bursting into tears. “But I don’t want you to die!” And then, “I don’t want to die!”

He cried. I tried not to.

I was raised Unitarian, and my thoughts on the afterlife are not fully formed. But I finally tried to comfort him by telling him that some people believe that there is a place called heaven, where friends and families and even pets can all meet up again someday. That did seem to help, and we hugged each other on the kitchen floor, hoping that heaven was real.

We live near a funeral home. We walk by it several times a day, going to the library or the park or pretty much anywhere we need to go. After that conversation my son asked a lot of questions about it, some not quite on point, like, “Why do people when they get really sick go there and die?”

One of my husband’s favorite overheard conversations occurred when walking by it. My son was sitting with my daughter in the double stroller. As we walked by, my son explained to her in his teacher voice, “That’s where people go to die.” To which my daughter responded, “Yeah.” Pause. “I like juice.”

After the initial shock of the realization of death, my son became less sad and more curious. He was mostly interested in the practicalities of it. When he died, would he be able to move? Would he be able to see?

He became very concerned about what would happen to his body. He did not like the idea of being buried. I told him that some people choose to be cremated and have their ashes scattered, usually in a special place like the ocean or a family home. He decided he would like to have his ashes scattered out of an airplane, which led to an interesting offhand comment he made to one of my friends during a playdate: “When I die, I’m going to get thrown out of an airplane.”

The intensity of the curiosity abated. Every so often he would say, “I don’t want to die,” but it was a fleeting thought.

Then the other night, for her bedtime book, my daughter picked the book Lifetimes: The Beautiful Way to Explain Death to Children

. We got this book when my son first started asking a lot of questions about death.

It’s a lovely book. Its premise is that everything that is alive eventually dies, and what matters is the living in between. It goes through the life cycle of butterflies, trees, fish and even people. And yes – all of them eventually will die.

We got a few pages into it when my son burst into tears. “But I don’t want to die!” he sobbed. “If I die, I won’t be able to see you, and I want to see you every day!”

I hugged him tight. I want to see him every day too. And for a long time, hopefully a very long time, we will. But there will be a day when we don’t.

That night, though, I just held him close and said, “I know.”

Then I had my daughter pick a different book, and I replaced half the words with “poop” and “toilet,” which made my son laugh, and made my daughter annoyed because she wanted the real words. Balance was restored.

Since then, he has made a few mentions of it. Yesterday, sitting on my lap, he said he wanted to be a house, because houses weren’t alive and so they didn’t die.

“But if you were a house,” I said, “You wouldn’t be able to laugh or hug or draw or do any of the things that make it so amazing to be alive.” He didn’t say anything, but a moment later he got off my lap, took out a piece of paper, carefully chose a red pencil, and started to draw.

Author bio: Ali Wilkinson lives in Portland, Oregon with her husband, three small children, and two large cats. She is a lawyer, writer, knitter, runner and over-consumer of Nutella. She blogs about parenting and other things that make her laugh (and cry) at Run, Knit, Love. You can also find her on Facebook and Twitter. For more info on guest blogging on Mama Lovejoy, visit http://mamalovejoy.com/?page_id=25.