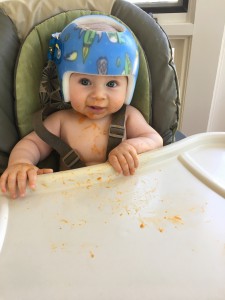 Last night after seeing my baby, an older woman who looked genuinely concerned, grabbed me by the arm.  “I can see your baby has had some special needs,” she said to me.  “Let’s just pray for him.”

My baby boy wears a helmet all day, every day.  People stare and ask weird questions about it.

“I know that receiving the news that your beautiful, perfect baby needs to wear a helmet can be shocking and heart-breaking for many parents,” explains Brittany Gonazalez CO, MSOP and orthotist of Prosthetic and Orthotic Group, Inc.  She shared info on some of the most frequent questions she hears, to help set the record straight on what helmets are really all about.

So where are we now-battling awkward questions from strangers?

In our case, I was initially excited to get our baby a helmet, after hearing such positive feedback about moms I’ve known through my daughter’s infanthood and through blogging:

One mom once started crying about her son’s helmet.  She shared that she was SO GLAD she’d gotten him a helmet-his head scans revealed that if she hadn’t, his facial structure would have been affected because of the flat spot on the back of his head.

I will say though, it’s been a bit handy that he’s had on a helmet a few times, when otherwise he would have bumped his head into something.

Also, I was re-energized after our last visit to the orthotist.  Our little guy had a bit of a cone-head shape from birth that’s visibly better.  Also, our Orthotist shared that his head has grown 5mm lengthwise and only 1mm wider, which is what we want… so it’s really working and it’s going faster than we’d planned.

We probably only have a few weeks left and he’ll have a nice round head for the rest of his life.

And you know what?  He’s still in there.  He’s still just a smiley, sweet ball of love and the helmet doesn’t change that one bit.

The helmet has even started to grow on me a little.  He’s still just as cute as can be, to me.  I took a picture of him after trying a carrot puree for his first time, and he was just so happy and cute covered in carrots.  I don’t know-or really care-if others see him that way.

He just melts my heart.

As for the weird comments we’ve heard, we’ve heard just as many sweet comments from parents admiring his eyes or smile or sharing that their baby also wore one.

When I get questions from strangers about his helmet, I usually explain the helmet to them.  In that moment where the kind woman suggested we pray for him… I appreciated her caring, and I welcome prayers for my baby, and for all babies with or without special needs.

So, this time, I just thanked her.

He’s perfect to me and he’ll be even more perfect thanks to his helmet.  And I love him to pieces no matter what.  I’m glad we can do this for him. 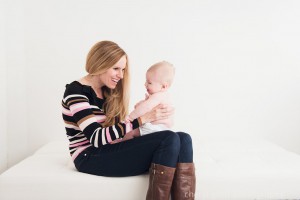