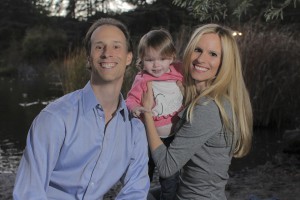 In December, we sent out a holiday card. We shared some happy memories and included some smiley family pictures. We wished everyone well. And we meant it.

But there were some things we didn’t tell you. I’m pregnant in those pictures.

Don’t congratulate me yet though…

I first discovered I was pregnant again, in May, 2015.  I decided to surprise Josh with the news. I quickly stuffed Savannah into a “big sister” onesie, as I heard the garage door opening (she was less-than-thrilled with this plan). When Josh walked in, I asked if he’d noticed her shirt. He did a double-take then grabbed me and kissed me.

The next day, he surprised me with a beautiful bouquet of flowers. 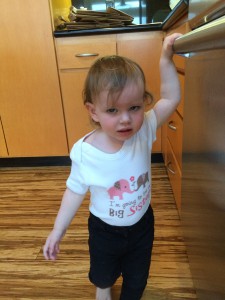 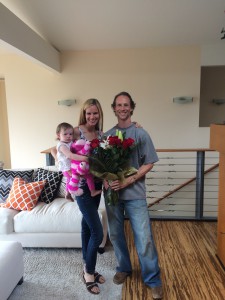 I was worried about how I’d manage two little kids at once. But there was still so much hope and excitement.

We told Savannah that soon she would have a sibling and that was the greatest gift in the world. My little brother, Rob—who means the world to me—is 26 months younger than me, and her little sibling would be too. This would be her little Rob.

But before we knew it, we’d lost the pregnancy.

I felt so guilty for not embracing the pregnancy more.  For not loving that tiny baby more.  For losing our little Rob.

I blogged about the miscarriage (The Surprising Truth I Learned About My Miscarriage) and looked for a silver lining. I tried to pass it off as an anonymous post, but people saw right through that.

I’m kind of glad they saw through it though, because a few friends later faced similar losses. I was glad—for them and me—that if we had to go through this, at least we could talk about it with each other.

In November, I got another positive on a pregnancy test. Again, I decided to surprise Josh with the news.

When Josh got home, I had my hands full—I asked if he could get dinner out of the oven. Of course, instead of finding dinner in there, he found a “bun in the oven” (OK, it’s an English muffin… you get the idea though). 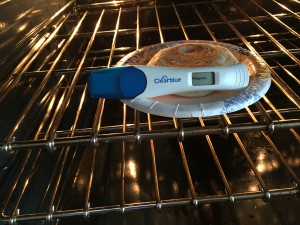 Again, he was so excited. We both were. I didn’t have a shadow of a doubt about wanting this pregnancy. I treasured it and prayed it would last.

After a week, I took another pregnancy test. I had to see it. Still pregnant! Josh laughed at me.

And he surprised me with another huge, amazing bouquet. 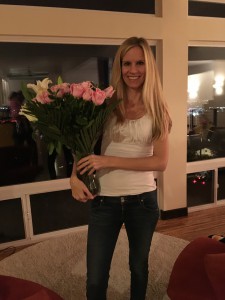 Then I started seeing signs of trouble. We found out the day before Thanksgiving that we’d lost this pregnancy too.

I’d just written an article (Being Thankful) with a nod to a woman I’d recently interviewed who’s had 5 miscarriages. She regretted not spending more time with the son she has, while trying to conceive again. She wanted people to know it’s OK to love your family and to live your life, even if you’re facing losses.

I decided I’d rather do that, than lose my mind over our losses.

Since it was Thanksgiving, my parents were at my house when I got home from the OB. With tears in my eyes and barely able to speak, I told them we were pregnant again, but not anymore.

There was so much love in that room. I was so grateful to have my parents to cry with… and to have Josh, Savannah and my brother in my life.

And here’s the thing. 2015 was a tough year. But there was so much beauty and joy too. We went to the park together.  We ran with the dog, flew a kite, and went to an amusement park. 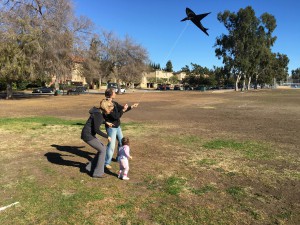 We laughed, loved and saw the world through my young daughter’s eyes. 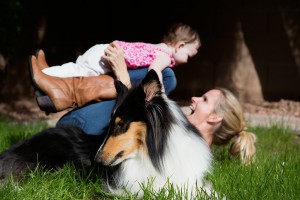 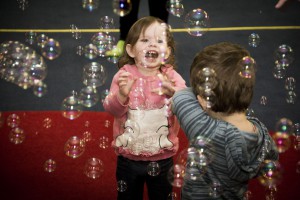 Sometimes you hear people say that they’re glad to see a year behind them. But, I didn’t hate 2015. I actually cherished it, for the most part. And I had loved ones to cry with through the tough parts. That means a lot.

January is going to be tough. That’s when Savannah’s first sibling would have been born. And that’s when we can try again.

My next pregnancy will be very high risk—my OB doesn’t even want me to hold Savannah, once I’m pregnant. Of course, Savannah wants to be held all the time. We dance, run, snuggle and climb together.  Every. Single. Day.

She climbs all over me (i.e.: beats the crap out of me), right before her nap. And sometimes when she’s upset, the only thing that calms her is snuggling with me in a baby carrier. How am I supposed to not hold my baby?

So for 2016, I’m nervous, but hopeful. I don’t want to put our lives on hold, or to miss out on holding my baby when she needs me.

I’ll be super-fragile.  I’ll try this.  But only once.

Our holiday card wasn’t a lie. We really did have some wonderful times and we’re grateful for so much.

And, we do wish you all the best. We want to celebrate your babies and laugh and sing with you (if you can stand my singing!). We’re so grateful for you.

I hope we can be real about the hard times. Life is still beautiful, even if we’re real about it. And, everyone deserves a friend to cry with during the tough times.

And last, we wish for you, that even though you’re facing bumps in life too—because everyone does—that you also don’t miss the good stuff along the way.  Hold on tight to the ones you love!  Cherish the good stuff. 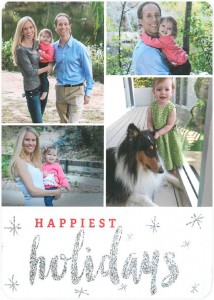