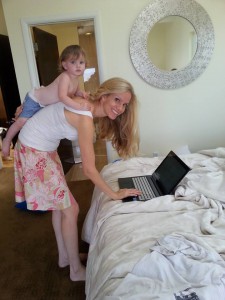 Four days after having my baby, my daughter pulled off a piece of my already-destroyed nipple. My husband came into the room and smugly told me, “looks like you have everything under control”, before walking right back out. I wanted everything for that little baby. While I bled all over myself, I wondered if I was failing her at just 4-days-old. I was devastated… and I was beyond furious with my husband.

Months later, I realized all of my mom friends had faced and overcome incredible challenges. Their experiences were beautiful and devastating at the same time. So many of our challenges could have been avoided if only we’d had the right information sooner. That’s why I started my blog.

I interviewed moms to share their surprises and challenges. And I interviewed pediatricians, psychologists, and parenting experts for their tips. I write about what no one tells you about parenting.

Blogging has helped me to process my thoughts, to share a laugh (or some tears), and to connect with the world. The best part has been hearing from people who tell me that one of my articles helped them.  I’m also thrilled to have been published in a bunch of magazines and large blogs, to have appeared with Tyra Banks talking about my Mama Lovejoy blog on FABlife, and to have made it into the top 20% of websites worldwide.  I should mention that my husband has been my biggest champion in blogging and I love him dearly, despite those early struggles.

I just recently discovered that probably more than half of the moms I know have thought about starting a blog. I’ve loved blogging, and I want that for you too! So, I reached out to several successful mommy bloggers to share their stories about starting a blog and their tips. This one is for all the parents out there whose world was rocked when they had kids, and who now have a story to tell!

I started Mamalode because when I had my first child I was scared and felt alone in the mixed emotions. When I met other moms who were open and authentic, it fundamentally changed parenthood for me. I wanted to celebrate those women so I threw a party on the night before Mother’s Day and called it “Mother’s Day Eve®”– the first year there were 45 women, by year three it was 450 women. Mamalode launched from there—the desire to find continual ways for moms to connect and support each other. (Fun fact: We trademarked Mother’s Day Eve ® and have now licensed it in over 100 communities across North America)

Mamalode is like my third baby. It has grown up, matured and challenged me. I started Mamalode with $400 and launched a free, local print magazine. Now it is a multi-platform media company with a worldwide audience. My baby is growing up!

Collaborate. Prioritize. Sleep. Eat. Chew your food. Slow down when you can. Speed up when you can. Be patient with yourself. There will be enough time; it just might take a while. Go for it. Say yes. Meet lots of people. Ask for what you want. Don’t work your butt off to build the life you didn’t want—be clear on the dream.

Writing had always been my outlet but never so much as after I lost my first pregnancy. We struggled to conceive again and once we finally did, I decided I would chronicle the 9 months. I started a blog and posted regularly for a VERY small group of friends and family. Three years later I decided to rename and rebrand. Juicebox Confession was born.

I started off with very few readers and a small following on social media. I didn’t pay attention to any of the numbers and kept writing for myself. I found my point of view and my voice. I eventually submitted to and was published by a few bigger sites that shared a similar feel as my work.

Through my blog I was offered a position as a columnist at my local newspaper. I feel incredibly fortunate to get to share my stories both online and in print. Eventually, my columns and blog posts led me to submit to HerStories and be published in their most recent anthology, Mothering Through The Darkness.

Blogging and writing is my therapy. It is how I process my struggles and celebrate my joys. I use it to document my days and save snippets of life to revisit later.

My advice for aspiring bloggers is, just do it. Start writing and don’t stop. Write from your heart and you will not go wrong. Write for yourself and the readers will follow.

I really didn’t find my voice as a writer until I became a mother in 2009, and suddenly, I felt like I had something meaningful enough to share. I had my second child in 2014 and after experiencing post-partum depression, writing is what helped me to heal.

My children have called me to rediscover myself, as I once was long ago. Becoming and being someone’s mother has been a journey for me—one self-discovery as I mother these pieces of my heart.

At first, I wrote for myself, but by the end of April 2015, I started sharing with a small focus group. In June of 2015, my first essay was published on The Huffington Post and I have since been published in many other places.

Most of my writing is about life with my children. Becoming a mother has been like a camera lens coming into focus: I see what really matters to me and I write about it. Before I started writing again, I don’t think I noticed all the extraordinary things that happen to me in a very ordinary day; I try to see beauty in the mundane.

While getting published is important to me on some levels, I try to remember this: while being published has been a blessing, the writing is still for me. It tells stories I will never forget and it is chronicling a life with two, small children. And, it tells my story as I mother my children, my spirit, and the sacred (a.k.a. the divide).

My biggest piece of advice is not to give up. The rejections, which are inevitable, are hard, but if you do it for yourself, the reward is there. It’s normal to look for outside validation, but if you put in the context of chronicling a life, it is all the validation you really need.

My second piece of advice is to listen to your children and try to see the world through their eyes.

When my son turned 2 he started daycare for two mornings each week. I’d been a full time, stay-at-home mother up until that point, and while it wasn’t enough time to take on any paid employment, I needed to do something to get my foggy brain working again. I’d always been a keen writer, and before parenting my job at an NGO involved a lot of communications work. I’d stopped writing entirely after having my son, and a blog seemed like a good way to get back in the habit of regular writing.

I think all bloggers go through a cycle. We all start because we love writing, then after a few months we start obsessing about stats, rankings, awards, PR opportunities etc. A lot of people get so caught up in promoting they forget about the writing. I feel lucky to have passed through that stage (several years ago!) and come out the other side. I’ve made some great friends through the blogging community, but I’ve always been clear that my blog itself is not for making money. I hope to continue building my work as a freelance writer, and I use my blog as a portfolio that I can direct editors to, but because I haven’t monetised it directly my blog is a fun and low pressure place, and writing there remains a joy.

Make a decision early on about the kind of information you are willing to share on your blog. This is different for everyone, but I was always very clear in my own head about the no-go areas – nothing overly personal, nothing that might later embarrass my son like tales of potty training, nothing about disagreements with my husband. I still think about those self-imposed rules every time before I hit publish.


Thank you to each of these bloggers for sharing their stories and tips. Also, thank you to Mamalode writer’s group, for letting me include some of their writers in this article. If you enjoyed this article by Mama Lovejoy, you can follow me on Facebook, or @MamaLovejoy1 on Twitter, Instagram, Tumblr or Periscope.