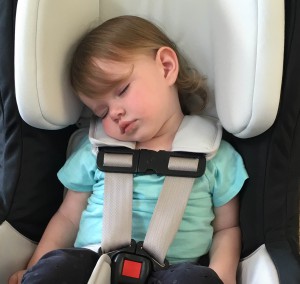 Twice last month, my husband and I arrived at two different BBQs with my 22-month-old daughter asleep in the backseat—which happens far too often and pretty much means the rest of the afternoon is wrecked. We arrived at the first BBQ, fifteen minutes into her car nap, and I tried to pick her up, hoping she’d sleep on me. Fail. She woke up and eventually threw a hysterical, over-tired tantrum… then, she fell asleep on the car ride home, leaving me stuck in the car for two hours until she woke up. At the second BBQ, we decided it was safer to just drive around with her for two hours, before going in (very late) to the BBQ.

Then, a couple weeks ago at a Child Safety Expo, I was wandering the booths. I almost didn’t talk to the Orbit Baby folks. I already had a convertible car seat for my 22-month-old. But, I decided to say, “Hi”, on my way by.

I just about accosted that poor rep within our first 2 seconds of talking—the Orbit convertible seat works as a click n’ go! I loved, LOVED that I could just lift my daughter’s infant car seat (from another manufacturer) with my daughter in it, out of the car, pop it into a stroller frame, and go. I’ve actually said out loud that I wished someone made convertible seats that way, even if they were heavier. How did I miss this when I shopped convertible seats? And when can I get one?

Flash forward about a week and several big Orbit Baby boxes arrived. I was so excited, I literally took pictures and sent them to a friend.

Then some doubts crept in.

My husband pointed out that the car seat was pretty heavy (21.5lbs). My daughter’s probably 25lbs now, so that would be almost 50lbs combined.

But, even if this seat was heavy or turned out to be difficult to move, it would solve a real problem for me (the dreaded car nap).

So we tried it out. Here’s the low-down on pros, cons and everything you need to know about this system.

The Obit G3 Car Seat and Base

The installation of the base was very easy and quick.

I’d totally underestimated how much I’d like the 360 degree turning. I can turn the empty seat toward the car door and my daughter literally climbs into the car, climbs into the car seat, and sits down (sometimes she throws in a proud, “Yay!”, once she’s in). Ha! With our old seat this was a lengthy negotiation, plus I sometimes bumped her head on the car ceiling on the way in.

The seat belt tightens way more easily than our last convertible seat’s, which usually still had a lot of slack in the belt even after I put my whole body weight into tightening it. I feel like that alone leaves her safer.

The seat has a few other cool features too, like magnetic circles on the sides of it that you can stick the buckles to, to keep them out of the way. The fabric is also super-easy to remove and I love that it’s chemical-free.

The seat doesn’t come with a cup holder, but that’s no biggie for us. Half the times I used our old seat’s cup holder, my daughter ended up soaked anyway. I usually just pass her a sippy cup over the back of the seat and ask her to give it back to me when she’s done.

Also, the 360 degree feature is only available when the child is rear-facing (braces are used when it forward faces). Likewise, the braces are used and the seat doesn’t turn, when using the seat without the base. Last, the sun shade is purchased separately.

Overall, I believe she’s safer now that she’s snugly seat-belted in, and it’s so much easier to get her in and out with the seat facing the door.

The option of turning the seat 360 degrees on the stroller frame rocks. Recently at Disneyland, my daughter wouldn’t stay in our stroller, so I ended up having to carry her around for hours. My back still hurts. Now if she fusses, I can turn her toward me (or away from the sun, or toward something interesting), without having to take her out of the seat.

The stroller rolls very smoothly, even going backwards, and it’s sleek, comfy and beautiful. I like the double cup holders built into the frame and the storage basket underneath. I also like that I don’t kick the basket underneath (thanks to the adjustable telescoping handlebar).

Also, for travel, it will be so nice to have a quality stroller along, without having to haul around a full-size stroller (the car seat just snaps right into the stroller base).

It’s worth knowing that the storage basket is sold separately and the car seat doesn’t recline in the stroller frame.

Last, my daughter loves it—the first time I put her in there, she kept saying “one more minute” and “more”. She made me push her around for ages! 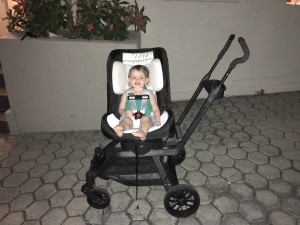 What’s the verdict on it as a click n go (i.e.: squeeze two levers and you can lift the seat right out of the car seat base with the kid in it)? As I write this, my daughter is sitting in front of me asleep on the bedroom floor in her car seat, because she fell asleep in the car. But we’re in the air conditioned house and I’m still free to do what I want to while she naps. So, I don’t care that it’s a bit heavy and bulky—it solves a real problem for me. I can get a good grip on it and lifting the seat (with her in it) is doable.

I totally love this system. The 360 degree turning is so helpful and nice for me and for my daughter, in the car seat and stroller. As for the click n go capability… if we still had our old car seat, I’d be sitting in my car right now, killing two hours instead of taking a much-needed break. So, even if it’s heavy, it’s pretty much life-changing. 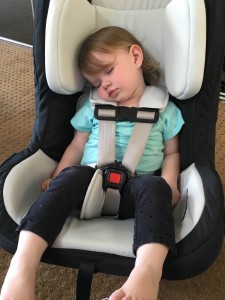 Thank you very much to Orbit Baby for providing me with an Orbit G3 car seat, base and stroller to try out for this review. I’ve included links below to the products listed in this article, in case you’d like more info (or feel free to message me if you have questions).  You can follow Mama Lovejoy on Facebook or on Twitter, Instagram, Tumblr, or Periscope @MamaLovejoy1.