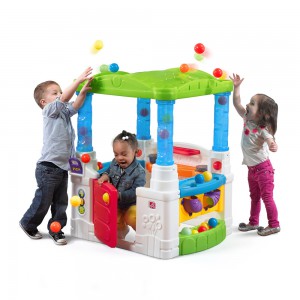 At a recent Kids Safety Expo, my family found our way into a room full of play houses, ridable cars, water tables, and play kitchens. My daughter quickly fell in love with a really cool toy playhouse, and I literally couldn’t get her out of it—it didn’t just have doors and windows, this thing had plastic balls running through the walls and a catapult. Seriously, at one point, I ended up just leaving my husband and daughter there, so I could go be productive.

The company who made the play house, Step2, had a representative there. She and I laughed about my daughter’s obsession and she offered to give us a play house.

Awesome! What a nice person. I mean, we may very well end up calling this thing our daughter’s second birthday present. 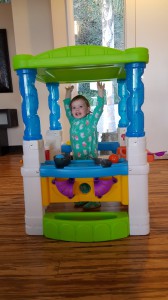 We had so much fun with ours that we also did a Wonderball Fun House giveaway over the Mama Lovejoy blog.  Since my daughter suddenly finally had something fun to do other than getting into mischief, we structured the giveaway around the ridiculous things we’ve let fly in exchange for a few minutes to get stuff done around the house…

I mean, I’ll confess, I’ve let my daughter empty the kitchen cabinets all over the floor, chase the dog around, stand in the dishwasher, pour water on the floor… you know, whatever it takes to keep her happy for a minute, so I can get stuff done.

We had all kinds of fun responses!  While one mom was busy, her toddler managed to post a picture on Facebook and comment on it.  Another mom knowingly allowed her daughter to toilet paper the bathroom, so she could get 5 minutes for a shower.  One kid took a five-pound bag of sugar and added half a cup of cold coffee to it, then proceeded to create a giant sticky mess of fun. And another mom allowed her kids to finger paint their feet on new carpet.  The winner gave her child frozen blueberries and posted a super-cute picture of her with blueberry all over her face, hands, and the wall. 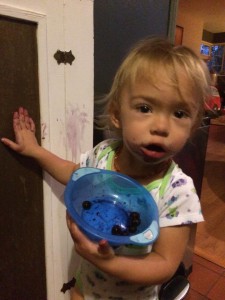 We had a fierce competition to win the house.  The mother who ended up winning it says her daughter absolutely LOVES theirs, too. 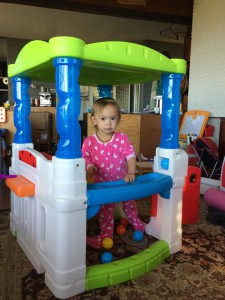 Here’s one last picture of my little one having a blast in hers!  Even after a couple of months, it’s still a riot.  And, I’m still enjoying a few extra minutes to get stuff done without having our home trashed! 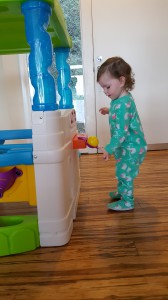