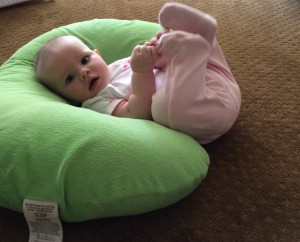 Are you thinking about weaning, but you’re not sure how your feel about it? Are you realizing you haven’t heard much from other moms about how to wean or what to expect? When you stop nursing and pumping, it’s bittersweet—it’s liberating, but you also say “goodbye” to some snuggles and to something wonderful that only you can do for your baby.

Before you start, you may want to ask yourself one more time if you’re really ready. If you decide to stop sooner than you’d planned though, formula is still great and you’re not alone. You did a wonderful thing, giving whatever breast milk you could.

To wean, just drop one feed per day, every few days. So, if you used to nurse or pump six times per day, drop to five per day for a few days, and offer a bottle instead for the feed you’re dropping. At first you may still make the same amount of milk as before you dropped a feed, but in a few days, your body will adjust. It’s a good idea to start by dropping some mid-day feeds, if you already normally go a long stretch at night without nursing, to avoid an extra-long stretch. If you take it slowly, you can avoid engorgement and injury.

As you wean, keep an eye out for plugged ducts. Continue to take any preventative measures until a couple of weeks after you’re done weaning. Your baby may enjoy some extra snuggles during this period, either as you offer a bottle or by reading an extra story to him. Also, your period may return soon (if it hasn’t already), so consider stocking up on supplies, in advance.

Last, know that you’re not alone, with any variety of feelings you may have about weaning. As these five women show, you could have a lot of different feelings about stopping:

Ready and happy to have my body back: “I was so happy the last day I breastfed”, Kim said, “I had wine at lunch, that day”. Kim felt she always had to think about what she was eating or drinking. She felt her son had her body for 9 months while she was pregnant, then for another year after that. The last time she nursed him she just felt like he was big and had an older way of looking at her. As she looked back at him, she just thought, “Yeah, we’re done”.

My little boy isn’t so little any more: I was so hormonal when I stopped. Ugh, it was awful. It’s sad and tough that they aren’t as dependent on you, anymore. But, helping them become independent means you’re a great parent. And you get so much time back in each day…

I’m not ready to stop—I want everything for my daughter: I nursed and had to supplement with formula, but after our first couple of months we’d found our stride. I’d planned to stop at 9-months-old so I could give my body a few months break to recover before trying for our second child. But, after all of my struggles getting breastfeeding to work, and how well it was going, and how good it was for her… I was really heart-broken about stopping. And, the American Academy of Pediatrics (AAP) encourages breastfeeding for one year or longer. So, I asked myself if I really needed to stop now or if I should keep going. I waited until she was a year old. The last time I nursed her, she nursed for such a long time. I’m glad she made the most out of it. I choked up as we finished and cried about it several times after that. I wanted everything for her and now I wasn’t going to be doing this wonderful thing for her anymore. A month later, she still tugs at my shirt and I’m still super-sad, like I gave up on something important for her.

Stopping was a huge relief: When Olivia nursed her newborn, she had pain that made her scream, so she started exclusively pumping every two hours. She was exhausted. Then her doctor told her she needed to go on a dairy-free diet. On top to that, her obstetrician diagnosed her with moderate post-partum depression. But her OB also gave her hope, by telling her that if pumping was causing her this much stress, it was OK to stop. “My world changed after that,” Olivia shared, “I was done with people saying formula was bad. If there weren’t so much pressure to breastfeed, I wouldn’t have gone through all of that.”

Proud that I made it: Dana exclusively pumped, and was able to provide her baby with breast milk for over a year. She was really ready to stop pumping, but she was sad when she returned her pump. She joked that it had been her best friend and that it was weird she could be so attached to a machine. But, as she reflected on it, she was incredibly proud of everything she’d accomplished.

You’ve done a great job with whatever you were able to do for your baby. Hopefully you also will have a smooth time weaning and you’ll be able to look back on your time breastfeeding and feel proud of what you did for your baby.

Thanks to these mamas for sharing their tips and experiences.  If you want to receive Mama Lovejoy articles automatically through your Facebook feed you can, by liking the Mama Lovejoy Facebook page.