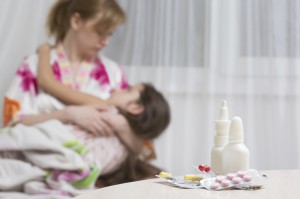 The crying began at four thirty in the morning. The guttural, staccato sound was jarring, although not unusual. I got up quickly and made the familiar dark passage, five steps across the hallway, to my son Benjamin’s bedroom. “Please don’t wake your brother,” I whispered, turning on Benjamin’s turtle nightlight, with its stars that project onto the ceiling. I put on his favorite bedtime music (Teletubbies, unfortunately), and he calmed down after a few coughs. “Maybe that cold isn’t quite gone yet, my love,” I said, then tiptoed out and collapsed into bed.

My husband slept on, oblivious. He works long hours and isn’t likely to wake from such a mild disruption. To be fair, John’s had his share of midnight trips to our two children’s bedsides. I remember once finding him fast asleep on the floor next to Benjamin’s crib. John’s arm was wedged between the bars, holding Benjamin’s hand. That was years ago. Under normal circumstances we would no longer need 24-hour watches.

Just as I began to drift back to dreams, I was startled by a new sound. My eyes shot open. For a moment I thought I had merely caught myself gasping, as if waking from a nightmare. I couldn’t comprehend the noise. Was Benjamin coughing? My ears strained as I squinted at the darkness, waiting. I hoped he wasn’t having another mysterious vomiting episode. Although we’d enjoyed an extended absence of those events, it was easy to recall the terror of long nights holding my retching son, desperate to keep his airway clear.

Those memories forced me into action. Every cell in my body was exhausted, but the adrenalin was pumping. Organizing my thoughts, I remembered to close my younger son’s door before going back to his brother. At 11, Sebastian was still afraid of the dark, and of Benjamin. Sebastian’s autism skews his logic and his ability to empathize with his 15-year-old brother. I could sense his potential anxiety.

With Sebastian’s door shut, I went into Benjamin’s room to figure out whatever I had failed to realize the first time. I spoke softly and groped around in the dark. “Are you okay? Do you have a fever? No. Is your g-tube still in place? Yes.” That was a relief. I’d never replaced a feeding button on my own, and I wasn’t eager to self-train while half-conscious. “Do you want me to play James Taylor?” I asked these questions, knowing there would be no reply. Benjamin’s inability to speak distresses me most whenever he’s sick. How can I help him fight pain or illness when there’s no clear understanding of what we’re up against?

Benjamin took a fast, deep inhalation, accompanied by a violent outward thrust of his arms, followed by a short cry. Seizure. I threw off the covers and slid him to the edge of the bed. Then I sat him up so he could cough out the saliva he was struggling to swallow.

I know it’s contrary to the standard seizure instructions: Put the child on his side. Do not restrain movement. Put something soft under his head. But I don’t care what the books say. After 15 years, and at four thirty in the morning, I make the battle plan.

Sometimes, I’ve found, a change in position calms the seizure. At the very least, it comforts Benjamin. He cries less. I sat behind him and wrapped my leg across the front of his body so he wouldn’t fall off the bed. I hugged him tight, pressed my hands against his fast-paced heart. “I’m here,” I whispered. I listened to Benjamin’s silence. I waited. Moonlight streamed through the windows, its blue haze full of dancing particles. Their constant motion agitated me, and I looked away, trying to take slow steady breaths, wishing away this attack.

Benjamin jumped again, his head pressed back hard against my arm. His eyes rolled upward. He tried to cough, but couldn’t. What if his saliva slid past his temporarily seized muscles, infiltrating his lungs? I considered the suction machine, which sat half-assembled in the corner. It’s a noisy contraption with too many parts. Benjamin hates it. Loud sounds startle him, and it’s a bad idea to place anything into the mouth of someone who’s seizing.

He looked at me and coughed. For the moment, he was with me—until the next burst of misfired reactions, deep within his brain.

Why or how my son developed lissencephaly, a rare brain malformation, I’ll probably never understand. Benjamin had his first CAT scan at four months old, because his head circumference was a little small. The instant I saw the haphazard convolutions, asymmetry and abnormally large, fluid filled spaces, I knew his condition was beyond anything that could be fixed. My degrees in dance and special education had prepared me, in theory, to manage the needs of a child with physical and cognitive impairments. But some things can’t be taught in a classroom. So for 15 years, now, I’ve been doing what I can to give Benjamin the best possible quality of life. It never feels like enough.

Sometimes, during these long nights with Benjamin, I think about soldiers at war, settled into deep, dark trenches, far away from home. I don’t know what it’s like to pray for a life-saving peace while waiting for bombs to fall. I can only imagine sitting there in the profound silence, an eerie, tactile noiselessness in which you’re so hyper-aware that the sound of your own breath is frightening. Where your heartbeat is so loud that its drumming belies the facade of peace cast by the moon, shining upon the world. I wonder if there’s a sense of relief when bullets finally break the stillness. Or is fear always at the center of attention?

I don’t know. I haven’t been to war, but perhaps, on nights like these, I’ve had a glimpse.

Now, every time Benjamin’s head jerked back, I kissed his forehead. I repeated a familiar mantra, “I’m right here. Stay with me. I’ve got you.” I glanced at his clock to track the length of the seizure. It’s standard to give emergency medication after five minutes. We have Diastat, rectal Valium. Rectal Valium: two words I never thought I’d associate with my own child. But then, whenever I take the time to look at our lives from the outside, I’m stunned. John and I have become habituated to so many absurd things over the years, like sedating our son with life-saving poison. I hoped he wouldn’t need it tonight.

Benjamin’s seizures don’t read the rulebooks. They come and go as they please, despite our arsenal of anticonvulsants. When active, they fire with absolute authority, making me wonder if they’ll ever stop. Tonight’s was no different. I waited to see if Benjamin would turn blue, lose oxygen, or fall into an irreversible unconsciousness; but as usual, his symptoms calmed. He was responsive throughout, making eye contact every time I asked him, “Where’s Mommy?” He even smiled at me between jolts. The Valium would be unnecessary, I decided. Stimulating a new part of his brain sometimes seems to help drive away the surge, so I tried to encourage some vocalization. His mouth opened in response. Nothing came out, but I was proud of his effort. “Good try, Ben.”

I loosened my grasp on Ben. The seizure did not. A new round began. My body was tired, my mind spent. All my fear turned to fury. “Come on, Benjamin. That’s enough! Finish with this seizure, already.” I’d crossed over to the irrational side of the line. Here, on this side, I’ve lost the control I fight for during the seizures, the effort to make it all better. I know I can’t, and when I give in to that helplessness, I can lose all ability to reason. During times like this, I’ve heard myself say things that make no sense; but I still say them, even as I reprimand myself. Who in her right mind would scold a child while he’s seizing?

Now, rocking Benjamin in my arms, I sought redemption, “I’m so sorry, Ben. Forgive me. I just don’t know how to help you.” I watched the clock, held my son tight, and waited. The seizure pattern repeated: fast, deep inhalations, violent arm thrusts, his head pushing hard into my bruised biceps, eye rolls, followed by purposeful, bright-eyed smiles.

Abruptly, the seizure transformed, and now Benjamin’s arms became fixed in a forward extension. His face was frozen, his mouth slightly skewed. His eyes were locked in place, staring through me into the darkness.

“Come on Ben,” I shouted. “Stay with me. Benjamin!” I wondered if John or Sebastian would wake, but their comfort was no longer my main concern. Benjamin’s arms, still reaching forward, fired rapid, short, jerky movements. I watched for any hint of blue in his face. I searched, but failed, to find a glimpse of recognition in his eyes. “BENJAMIN!” I noted the time on the clock, steadied my breathing, and cleared my mind.

Mentally, I rehearsed my potential next steps. If Benjamin remained in this unrelenting state of seizure for five minutes, I would need to lie him on his side, remove his pants and diaper, retrieve the Diastat from his middle drawer, check the loaded dosage, pull the cap, lubricate the tip, insert, push the plunger slowly as I counted to three, finish the push and count to three again, withdraw the syringe, hold his butt cheeks together three counts more to avoid medication spillage, pull up the diaper, watch for respiratory problems, and hope the seizure stopped. If the seizure continued, I would have to call 911.

As the fifth minute approached, Benjamin’s arms relaxed. He took a normal, deep breath. So did I. “That’s my boy. Breathe.” He belched, shook all over, and chattered his teeth. I knew he was unlikely to go a third round. To test his level of consciousness, I joked with him, “Don’t you laugh at me.” He looked at me and smiled. “Don’t be bad,” I added. He laughed hard. I don’t know why these two particular phrases always crack him up, but I love his sense of humor. Holding him a little tighter I told him, “No one’s braver than you, Ben.”

It was past five in the morning; there was still time for a bit of rest. I tucked Benjamin in, turned on the star-projecting nightlight and his music, kissed him once more, and left. I always pause in his doorway for one last look and to say, “Momma loves Ben.”

If, one day, he doesn’t wake, I want those to be the last words he hears.

Author bio: Joanne De Simone is a special educator and mother of two sons with special needs. Her essays have appeared in several publications including Mamalode, The Huffington Post, The Washington Post, and Brain, Child Magazine’s Blog. This essay first appeared on Literary Mama. Hear more from Joanne on her blog: Special-Education Mom.