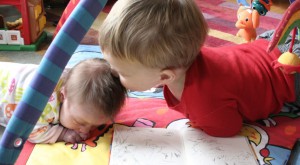 My brother and his wife just welcomed their second child into the world. While my sister-in-law was in the hospital with the newborn, my brother spent one last night with just their oldest. “His last night of full attention,” my brother texted me. “Feel bad for him.”

I felt the same guilt when my daughter, our second child, was born.

Since first meeting my son–really since knowing I was pregnant with him–I was consumed by him. I dutifully read all the pregnancy and parenting books, decorated his nursery in primary colors, knitted impossibly small sweaters and booties for him. I couldn’t wait to meet him.

During his birth, the room was packed with people. I didn’t have an epidural, and every nursing student was ushered in to see what a “natural” birth looked like. But when he arrived, it felt like just me and him. The relief. The instant love. The knowledge that this was it. This was him.

As many firstborns are, he was coddled, praised, adored. He was fretted over, researched, documented. I watched him play, and got down on the rug with him, moving cars back and forth. We walked unhurriedly from plant to plant, observing spiders and their webs, with nothing to distract us but growling stomachs or sleepy heads.

When my son was just over a year old, I became pregnant with my daughter. As my belly grew bigger, my anxiety grew bigger too. When we decided to get pregnant, a big part of our decision was the desire for our son to have a sibling. But as the moment approached, I felt a lot of guilt. When would my son and I be able to have these quiet moments together again? How would he understand that he was not being replaced by this new baby? How could I prepare him for his new role of “brother”?

The day before my induction there was a little St. Patrick’s Day parade in our neighborhood. We let my son have one of the watermelon jolly ranchers they threw from the fire truck. As he sucked on it, eyes wide with the unexpected treat, face and hands getting impossibly sticky and red, my heart broke. This sweet, sticky, little boy didn’t know what was coming.

We were prepared for a very quick birth the second time around–my son was born very fast in just four hours from start to finish. They wanted to induce me because there was concern I wouldn’t make it to the hospital in time if I went into labor naturally.

So as my husband and I packed ourselves into the car early that Sunday morning, leaving my mother-in-law at home with my son, I was plotting when my son would get to meet his new sister. We figured the baby would be born around lunch time, we could have an hour or so with her, and then my husband would go home and pick up my mother-in-law and some hot chocolate for my son (he let us know his wish was “Hot chocolate when sister comes”).

But, true to my daughter’s disposition, she didn’t take to that plan. One o’clock came and went, and still no baby. I was getting frustrated, desperate to see my son. The birth seemed almost secondary. Finally around 4 o’clock she arrived. I felt relief again, but this time more because it meant that my son would be able to see her before bedtime. I rushed my husband out the door to get him.

I loved my daughter at first sight too, but not with the same startling immediacy. Hers was a gnawing love that grew to consume and overwhelm me. But, initially, it was more complicated. It was complicated by this underlying sense of guilt, and the question of not just how she would fit in as our daughter, but as a sister too.

When my son walked into the hospital room for the first time, he immediately zeroed in on her, pointed his finger directly at her and said “that.” He then clamored over for a hug from me and hot chocolate from his daddy. He dutifully held his sister on his lap, then headed off for home, leaving me with my daughter. With his sister.

Looking back, I know I was overly concerned about how my son would react to his new sister. I was so worried that he would feel replaced that I overcompensated. But eventually, the guilt melted away. They began playing together–first just grappling over the same toy, and now playing crazily intricate games that defy explanation. They began talking to each other–first just my son teaching her words, and now ridiculous stories full of songs and poop jokes. They began watching out for each other, confiding in each other, protecting each other.

But not more guilt. Not anymore.

Author bio: Ali Wilkinson lives in Portland, Oregon with her husband, three small children, and two large cats. She is a lawyer, writer, knitter, runner and over-consumer of Nutella. She blogs about parenting and other things that make her laugh (and cry) at Run, Knit, Love. You can also find her on Facebook and Twitter. For more info on guest blogging on Mama Lovejoy, visit http://mamalovejoy.com/?page_id=25.