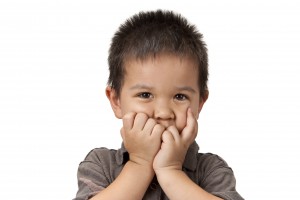 I have three children ages 5 and under. It goes without saying that we have seen our fair share of the inside of the emergency room. Most of the trips have been the result of the Murphy’s Law of parenting – namely, child breaks out into a very high fever at 5:31 p.m. on a Friday.

But by far the strangest trip to the emergency room happened a few months ago. It was the end of the school week, and everyone was pretty tired. I was making dinner and looking forward to getting our overly-tired children into bed. I had just poured eggs into the frying pan when my son came running in, sobbing.

Still sobbing, he gasped, “I don’t think I swallowed a penny!”

Well. This was new.

“I don’t understand,” I said. “What do you mean you don’t think you swallowed a penny.”

This question proved too much, and my five-year-old dissolved into further hysterics, unable to answer the question. My husband and I looked at each other, puzzled. Further investigation was needed. I called to my daughter, who had been playing with him in the other room, and asked her what happened. She developed her wide-eyed, mute façade, realizing the best way to stay out of trouble was to say nothing at all.

I sighed, turned off the eggs, and called my brother, an ER doctor.

“He said he doesn’t think he swallowed a penny,” I explained to him.

“So… he swallowed a penny,” my brother replied.

I sighed again. “Yeah, he probably did.”

Thus began the most embarrassing visit to the ER ever.

My husband took over putting food on the table, and my son and I headed out. He calmed down knowing that we were on the way to the hospital. While in the car, I again tried to get to the bottom of the story.

“I don’t think I swallowed one,” he said.

“But I don’t understand how it’s even a possibility – can you explain why you were so upset?” He couldn’t, so we continued our drive.

Upon arriving at the ER, I explained to the receptionist. “Hi. My son here doesn’t think he swallowed a penny.” She professionally held back a laugh, and checked us in.

Soon we were escorted to a room, where, once again, I explained to a nurse, and then the on-call doctor. “My son doesn’t think he swallowed a penny.”

“Did you swallow a penny?” the doctor asked my son.

“No,” my son replied. He was gaining conviction in his no-swallowing stance.

The doctor laughed, and said to me confidently, “He almost certainly swallowed a penny.” (Do they have a course on this in med school?) And then said that he would bring in an x-ray technician so we could see where the penny was. “It will probably be fine, but there’s a small chance it could get lodged, so it’s best to see what’s going on.”

My son was now happily watching Disney on the hospital TV, a treat he does not get at home. The x-ray technician came in. “I hear your son didn’t swallow a penny!” he exclaimed jovially. “That’s a new one!” He took x-rays while my son attempted to contort his head toward the TV, all thoughts of penny non-swallowing blotted out by Disney.

A bit later, the doctor returned.

“Well, your son is a truthful boy,” he said.

“You mean he didn’t swallow a penny?”

Right. I don’t even remember what our discharge papers were. “Watch out for signs of an overactive imagination”? I do know that we paid quite a bit of money for the privilege of being told my son did not, in fact, swallow a penny.

I never got to the bottom of what happened there. I tried to ask my son about it again on the way home, but he was tight-lipped. He at some point, days later, mentioned something about how he couldn’t find one, so he thought he must have swallowed it. Apparently, if it’s not on the ground it must be in the stomach? I am still so confused by the whole event. But am glad at least that it had a happy ending.

Author bio: Ali Wilkinson lives in Portland, Oregon with her husband, three small children, and two large cats. She is a lawyer, writer, knitter, runner and over-consumer of Nutella. She blogs about parenting and other things that make her laugh (and cry) at Run, Knit, Love. You can also find her on Facebook and Twitter.