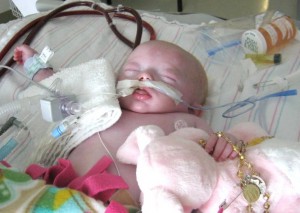 When Liza’s second baby, Dylan, came down with a cold, she knew in her heart that something was really wrong.

He was just 6-weeks-old, but he’d developed an old man cough and he was vomiting. She took him to the doctor, who tested for swine flu and Respiratory Syncytial Virus (RSV). The tests came back negative, so he told her it was just a cold.

Dylan kept vomiting, though, so Liza called the doctor’s office again. They didn’t have any appointments available. So she took him to the Emergency Room. The ER admitted him for dehydration and for observation.

Soon though, a nurse came in to discharge Liza and Dylan. “Take your child home”, the nurse told her, “He’s fine. It’s just a cold.”

Liza was so frustrated that Dylan wasn’t receiving more attention. “It’s not that I don’t want to take my child home,” Liza explained to the nurse, reminding her that Dylan was still throwing up, “It’s that I feel something’s wrong with him.”

“You know what—here’s the plan,” said the nurse, “If he can hold milk down for 15 minutes, we’re going to discharge him.”

Liza was shocked and furious. They clearly didn’t take this seriously. But, Dylan kept the milk down for fifteen minutes, and the hospital sent them home.

At that point, even her friends and family seemed to question if she was just being over-protective.

But, six days after their first trip to the doctor, Dylan was still vomiting and had coughing fits that left him gasping for air. Liza decided to get another opinion. The new doctor also wasn’t available though. His associate, a recent medical school graduate, saw them, instead.

Within minutes of meeting them, the recent med school graduate told Liza that she thought it was Pertussis. Whooping cough.

Dylan vomited in her office, while they were talking. The doctor shared Liza’s concern. “I’m not comfortable sending him home. We’re going to admit him,” she told Liza, “It’s going to get worse before it gets better.”

Liza was furious. Her prior doctor who was so experienced wouldn’t give her an appointment. The attending at the ER wouldn’t even see them to discharge them. Yet a brand new med school grad figured it out, right away.

Over the next few days, Dylan just kept throwing up. Sometimes he coughed until he turned blue and struggled to breathe. They inserted a nasal cannula to deliver supplemental oxygen. Liza spent days at his side offering whatever comfort she could.

Then, one day, while she was gazing at his precious, tiny, baby face with love and fear, she realized he’d stopped breathing.

She bolted out of the room and into the hallway, crying out for someone to help. A pediatrician happened to be walking by.

The doctor ripped the nasal cannula tape off of Dylan’s face. Dylan cried out from the pain. But that pain also started him breathing again.

After that, Liza was just petrified. “I was sooo scared,” Liza recalled, “I was terrified to take care of him. Just terrified and scared. Really, really scared.”

Her whole family offered as much support as they could. Sometimes, Liza went home to be with her other child, and her family slept at the hospital with Dylan. They spent ten heart-wrenching days in the hospital.

But finally, he stabilized enough to go home.

Pertussis, also known as “the 100-day cough”, is notorious for a long recovery. And sure enough, for the next month or so, Dylan coughed nearly non-stop.

Then, slowly, he started to improve.

He still struggled with eating, for a long time, taking only a very small amount of milk at a time. “They were constantly sticking tubes down that little baby’s throat,” Liza recalls, “All day, probably ten times per day, they were suctioning.”

The experience also changed Liza. She was a second-time mother, who started out feeling fairly relaxed about caring for Dylan. But after he was sick, she never fully relaxed again. “It really terrified me to have a third child,” Liza shared with a shaky voice, “I never had a third child, because I was so scared. I’m just scared. I don’t want to go through that again.”

Liza had done everything she was supposed to do to protect her family. She and her older child had been vaccinated, although she wasn’t positive of the date. Dylan was too young to receive his first vaccination.

And they weren’t recommending the vaccine, yet, for pregnant women. “I wasn’t vaccinated as a pregnant woman,” Liza explained. “He could have caught it from me.”

Today, the CDC does recommend the whooping cough vaccine, called TDAP, during third trimester, so a mom’s antibodies can help protect her baby, after birth.

She also became an even stronger advocate for other parents vaccinating their children. “I don’t care what the risks are,” Liza insists, “I think it’s selfish for other people not to vaccinate their child, because it can affect other children.”

And she counts her blessings. “We were really lucky,” says Liza, “Two other kids were there at the same time with whooping cough. One had a lung collapse and the other was on a ventilator.”

Today, Dylan is a healthy 5-year-old boy and she’s even more grateful for him and for her family who supported her through everything.

Although she may never fully relax again, her story offers an empowering message. She saved her baby, by sticking up for him, even when the world was telling her nothing was wrong. “Trust your gut,” she says, “If you feel something’s wrong, educate yourself and trust your judgment. And vaccinate your children.”