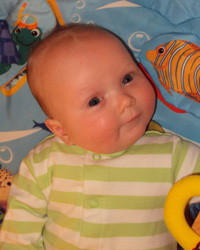 Becca didn’t think much of it when her newborn son, Henry, seemed to prefer her right breast—at least he was breastfeeding, which was challenge enough. She wishes someone had told her though, right then, that his preference for nursing on one side was a symptom of torticollis.

No one told her though.

Henry was four-and-a-half months old, when his doctor diagnosed his Torticollis. He explained that Torticollis is a condition where a muscle on the side of the neck is especially tight causing the baby to prefer tilting his head in one direction. It can be caused by the baby’s position in utero or in labor. It’s not painful, but it’s worth correcting so the baby has a full range of motion, and so they don’t develop a flat spot on the back of their head (plagiocephaly), which can lead to facial asymmetry.

By the time he was diagnosed, Henry already had a small flat spot on the back of his head. Becca took him to physical therapy where they recommended that she do some stretches with him, to loosen his neck muscle. They also suggested that she use a bolster to position him differently when he slept, to help to resolve the flat spot on his head.

The stretches sounded simple enough—three reps tipping his head to the left and three reps turning it to the left. By four-and-a-half months old, though, Henry was rolling over and starting to scoot around.

Every time she tried to stretch him, it was a struggle.

She was supposed to hold each of these stretches for one minute. But Henry would just scoot away.

And the stretching was non-stop. She was supposed to do the stretches after every diaper change. Meanwhile, she was pumping, nursing and just going back to work, too. They also saw a specialist weekly which meant a weekly one-to-two hour car ride, each way.

They didn’t progress as fast as they’d hoped either. “Well, I tried to do the stretches,” her mother-in-law, who provided child care while Becca worked, told her, “But he didn’t want to do them and I’m just Grandma”.

The sleep position sounded OK too. At first. Becca would put a bolster in the sleep sack under his back, with one arm in the swaddle. This was supposed to keep him on the side that tipped his head in the right direction.

He absolutely hated that bolster. And, he’d outgrown his bassinet, so they were trying to transition to his crib at the same time. Becca tried for hours and hours, night-after-night, but he couldn’t sleep like that.

Becca didn’t know what to do. She reluctantly decided to try sleep training him.

It was a disaster.

Henry just cried and cried. No one was sleeping. After a few nights, Becca was so tired, she became super-sensitive to her husband’s comments—so then, on top of everything else, they were fighting.

After six nights of that she decided it was enough.

She brought Henry into bed with her and her husband. He slept like an angel. She made the judgment call that she should address his medical condition first, then deal with any sleep challenges later.

It worked. Sort of. At night he would reach out to touch Becca’s face. By morning, he’d have his arm and hand right on top of her face. She wasn’t sleeping very well and she was heart-broken. “I think he’s checking to see if I’m still there,” she shared in a teary conversation. “I don’t think he trusts me anymore.”

They kept him in their bed for 3.5 months.

Then they hired a sleep consultant and tried again to transition him to his crib. The sleep consultant instructed Becca to put her son in his crib and to do a check-in after 5 minutes, 10 minutes, then every 15 minutes, until he fell asleep. Becca also decided she would sleep in his room with him, since he was used to having her there.

The first two nights were brutal—by the end of the night, Henry had cried for a total of three or four heart-wrenching hours. But he’d finally slept in his crib.

Becca left his room on the third night, on the sleep consultant’s suggestion. And Henry slept all the way through the night!

Then there were naps.

She tried sleep training for naps, for one day. Henry cried for hours that day, and Becca just decided it was too much.

So, she or her in-laws just held him for naps. That way, he wasn’t putting any pressure on the back of his head. It was exhausting, and whomever was caring for Henry never got a break during the day, but he was getting the sleep he needed.

A couple months later, he had a sleep regression. Becca decided against repeating sleep training at night. Instead, she and her husband brought him back to bed.

They finally resolved the torticollis and graduated from physical therapy when Henry was 13-months-old—after over 8 months.

Now, at fifteen-months-old, he’s back in bed with them, but they’re all OK with it—they’re sleeping. It’s working. They still hold him for all of his naps, but that’s OK too. That’s just how it is.

She wishes she could go back to those very first days with her newborn though to give herself some tips. She would ask the hospital, right from the beginning, to check him for torticollis. That way, she could start therapy much younger, when it would have been way easier and over way sooner. “I don’t know why they don’t just test all babies for torticollis in the hospital,” she shares, “with my next one, I’m going to ask them to check.”

She also would be more accepting of what worked for them with sleep. She would have just started him sleeping in a bassinet or crib that’s attached side-car to the bed.

She smiles proudly, then, reflecting on her first year, because it’s all worth it. She stuck it out through some real challenges and they resolved the torticollis and figured out a routine that works for them.

Today, Henry is a healthy, happy toddler and she’s a proud mama.

Thank you to this wonderful mom, for sharing her incredible true story.  If you enjoyed this article, you can automatically receive Mama Lovejoy articles in your Facebook newsfeed by “liking” the Mama Lovejoy Facebook page.