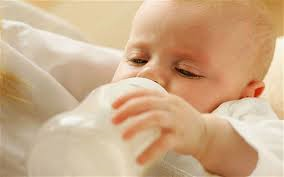 I planned to breastfeed my son, Quinn, for 6 months, but nursing killed my nipples. And it just about killed me.

I was so stuck on breastfeeding that I avoided the pump like the plague, while I was at the hospital. That left my poor nipples so damaged.

I spoke to a lactation consultant while there, but she wasn’t very good. She was really young, and I wondered if she even had kids. She kept telling me I was doing everything right. Well, obviously I was doing something wrong, because I wrecked my nipples. I complained about the pain and she gave me a nipple shield, which helped some. I kept nursing sometimes with and sometimes without the shield.

Once we were out of the hospital, I went to a different lactation consultant. She wasn’t nurturing at all—it was a pretty stressful visit. She was horrified that I was using the shield. She told me I had to pump for a week to let my nipples heal.

Soon after, at Quinn’s first appointment with the Pediatrician, I was horrified to find out that he wasn’t gaining any weight. Our pediatrician made a really big deal about it.

I was devastated and felt like a horrible mother for making my baby starve.

The pediatrician told me I had to pump, so I’d know how much milk he was getting. She told me to supplement with formula if I didn’t make enough.

After a week, my nipples were healed. I tried to get Quinn to latch on, but he would scream out of frustration. He had this blood-curdling scream, and I wanted so badly to do everything I could for this baby. So, between the fear that something was wrong and not knowing what to do, his cries just left me feeling terrified and stressed out.

I went in to the see a lactation consultant, again. She weighed him before and after I nursed to see how much milk he was getting. I thought I was the only one weighing my baby. Then I noticed everyone there was weighing their babies.   I guess everyone was having the same issues.

But I still felt sad and alone.

The lactation consultant also told me to stop supplementing with formula. She was really against it, which added more to my anxiety about pumping and nursing.

My son woke up every two hours, even at night. My husband fed him when he woke up, but I still had to get up to pump.  I stopped nursing and I pumped full-time.  Every two hours for 30 minutes to an hour, each time. All day. All night.

I bought a book on Exclusive Pumping (EP) and read everything I could on websites and online boards. I was obsessed with making sure I pumped enough milk for my baby. I took fenugreek and mother’s milk tea, and started timing when I pumped the most milk. I bought Pumpin Pals breast shields, to get a better latch for my pump. I constantly asked for support from other moms. I even wrote the author of the book and she wrote me back with advice.

Then there were the plugged ducts.

Ugh…the plugged ducts was the worse. My breasts would fill up but the milk couldn’t get out, so they’d get super-full. Then I’d just be in pain until the plug went away. I couldn’t even imagine doing this long term. I thought, maybe I’d do this for three months instead of six.

Meanwhile, my mother-in-law was staying with us, to “help”. Ugh, don’t have family around, in that first week! She just wanted to be involved in everything, and it drove me crazy.

I actually left the house and took my son to my mother’s house, so I could sleep. I set the ground rules, in advance. “Don’t ask me about breastfeeding,” I told my mom, “And, if I’m in my room, I’m breastfeeding, so leave me alone.”

After that, I went home and had a meltdown, about the situation with my mother-in-law. “She has to go,” I cried to my husband.

Thankfully, she left after that. I wish we’d hired a night nurse instead.

It was all really hard. For my first month as a new mother, I really didn’t shower. I managed about one shower each week. I didn’t feel comfortable just putting down my son and leaving him somewhere. And, I was too busy pumping all the time. I didn’t really eat, either. My husband and I didn’t sit down for meals. He would hold the baby while I ate, and I would hold him, while he ate. I did lose most of baby weight pretty quickly.

We managed to keep going, until he was about 6-weeks-old.

I went to my OB, for my six-week check. “If pumping is causing you this much stress,” she told me, “it’s OK to stop.” And, she diagnosed me with moderate Post-Partum Depression (PPD).

I was surprised to hear that I had PPD. I just thought I was stressed and pissed. I hadn’t slept, I hadn’t eaten, and I’d had surgery, so I figured that was why I was in a bad mood.

I was relieved too. She said it was OK to stop. It wasn’t a big deal. She told me that she had to stop pumping for her baby when he was just a few months older than Quinn.

When she said that, a huge weight was lifted off of me.

Soon after that, we took Quinn to his next doctor’s appointment. His pediatrician told me I had to go dairy-free. It was like the universe was telling me, “It is okay to stop.”

I’d tried everything I could to continue the stressful and laborious task of pumping. Why? I don’t know. The pressure to breastfeed was enormous. I guess I could have stopped, but it was never suggested by anyone. No one ever gave me that option.

My world changed after that.

I stopped pumping and my stress was so much better. I didn’t end up needing medication for my PPD.

My son was fine on formula. He gained weight and he was healthy. And, he started sleeping through the night, at around four-months-old, when I found a different brand of diaper that kept him dry all night (Pampers Baby Dry).

And, my husband was so helpful, from the beginning. He was so understanding. I’d had a C-section, and I had a lot of bleeding. At the hospital, he actually asked them to show him how to help me clean, down there. And he did help with that, and I really appreciated it. We really tag-teamed all of the work, and I’m really grateful for what an amazing partner he was through everything.

I’m so sick of people saying that giving formula is bad! If there weren’t so much pressure to breastfeed, I wouldn’t have gone through all of that. I want moms to know it’s OK to make the decisions that are best for their families. It may mean not breastfeeding, and it may mean some things go differently than expected. But sometimes that’s what’s best for a family. They should never feel guilty about doing what’s right for their family. And they should know that they’re not alone.

Thanks to this mama for sharing her story.  If you want to receive Mama Lovejoy articles automatically through your Facebook feed you can, by liking the Mama Lovejoy Facebook page.